ADASS, the Astronomical Data Analysis and Software Systems conference, is held every year at a different hosting astronomical institution.

The conference provides a forum for scientists and programmers concerned with algorithms, software and software systems employed in the acquisition, reduction, analysis, and dissemination of astronomical data. An important element of the program is to foster communication between developers and users with a range of expertise in the production and use of software and systems.

The 29th edition of ADASS will be held October 6-10, 2019 at Martiniplaza, in Groningen – The Netherlands. 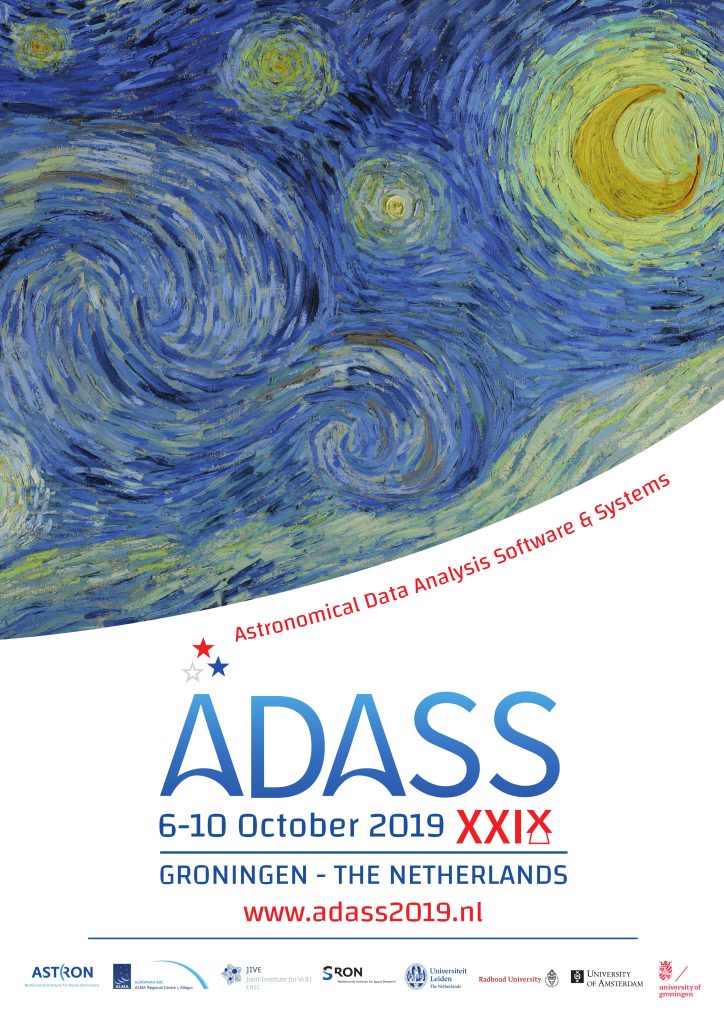 The 2019 edition of the yearly Astronomical Data Analysis and Software System (ADASS) conference will be organized by the Netherlands. The organization is a joint venture by all major astronomical institutes and groups in the Netherlands with ASTRON in the lead. For the logos of all organizing institutes see the sidebar on the right.

The conference provides a forum for scientists and developers concerned with algorithms, software and software systems employed in the acquisition, reduction, analysis, and dissemination of astronomical data.

ASTRON is the Netherlands Institute for Radio Astronomy. Its mission is to make discoveries in radio astronomy happen, via the development of novel and innovative technologies, the operation of world-class radio astronomy facilities, and the pursuit of fundamental astronomical research. Software development is an important component of the role ASTRON has in the community. ASTRON develops and maintains the software used to operate LOFAR and APERTIF, and to process the data generated by those telescopes. Further the R&D compute group develops new algorithms and investigates hardware platforms for usage with current and future telescopes like LOFAR 2.0 and SKA. Part of the ASTRON’s mission is to enhance the exposure of the data collections generated by its instruments and to enable their scientific exploitation by offering a platform for data processing and analysis to the users, which is an important current development.Also, ASTRON is leading the European SKA Science Data Center development.

JIVE The Joint Institute for VLBI ERIC is the central organisation in the European VLBI Network (EVN). JIVE implements the core data processing and user services that turn the network of distributed telescopes into a single observatory to study the radio sky at the highest possible resolution. Software plays an important role in the R&D at JIVE. The SFXC software correlator and its many advanced features was developed entirely in-house, as were several widely used recording and data transfer utilities. Much effort also goes into the upgrade of VLBI scheduling software, as well as into the development of VLBI data reduction functionality in CASA.

Allegro The European ALMA Regional Center node in the Netherlands, Allegro, is located at Leiden Observatory. Allegro offers general user support for the ALMA community, from proposal preparation to data analysis, calibration, and imaging. Allegro offers observers assistance with their individual projects, an office for visitors, and computer facilities to handle large datasets. Allegro provides expert knowledge in and development of high-frequency, long-baseline, and mm-VLBI observations to the ALMA project and observatory. Allegro also develops science analysis tools (simulation software and spectroscopic data bases) to help users in the interpretation of their ALMA observations.

Kapteyn Astronomical Institute of the University of Groningen has a long track record in astronomy and astronomical instrumentation & IT. It leads the Lofar Epoch of Reionization science project in collaboration with the University’s Donald Smits Center for Information Technology (CIT). Together with ASTRON it has developed the Apertif instrument for Westerbork Synthesis Radio Telescope. The Institute’s OmegaCEN expertise center for astronomical information technology developed Astro-WISE, which is used to produce and deliver to ESO the Kilo-Degree Survey. The WISE technology has formed the basis of the Dutch in-kind contribution to the Euclid Mission, which is led by Kapteyn-OmegaCEN in collaboration with CIT. They host the national Science Data Center for Euclid and lead the development of the Euclid Archive System in collaboration with ESA. They also lead the development of the science ground segment component for Euclid’s ground-based External Data. Kapteyn is leading the European SUNDIAL Data Science collaboration between astronomers and computer scientists and the data flow team for MICADO, ELT’s First Light NIR imager and spectrograph.

Leiden Observatory is the astronomical institute of the Faculty of Science of Leiden University. Established in 1633, it is the oldest university observatory in operation today, with a very rich tradition. Leiden Observatory carries out world class research in the formation of structures in the universe and the origin and evolution of galaxies, the detection and characterization of exoplanets, and the formation of stars and planetary systems. The observatory is involved in several international projects and contributes to the software development of, for instance, the EUCLID consortium and the E-ELT first light instrument METIS. Leiden Observatory also houses the Dutch ALMA Regional Center node and is leading the Gaia DPAC.

The Anton Pannekoek Institute of the University of Amsterdam, focuses on the astrophysics of ‘origins’ and ‘extremes’: stars and planets and their formation, cosmic explosions and compact objects. This extreme astrophysics work in particular relies on significant new developments in computational and data-driven astrophysics. On the observational side, the Anton Pannekoek Institute is involved in major software development initiatives to search for astrophysical radio transients using the LOFAR and APERTIF arrays and exploration of novel time-series methods to map the innermost regions of compact objects using X-ray data. On the theoretical side, work is pushing forward the use of GPUs to carry out massive general-relativistic MHD simulations of accreting black holes and the jet phenomena they produce. The Institute is based at Amsterdam Science Park, which is also home to Cartesius, the Dutch national supercomputer, and the Dutch national particle physics institute Nikhef, which the Institute collaborates with through the joint centre of excellence, GRAPPA (GRavitation AstroParticle Physics Amsterdam), on initiatives such as gravitational wave research and the CTA.

Department of Astrophysics, Radboud University Nijmegen The department is a young one, and is growing fast. Radboud participates in NOVA, the Dutch Research School for Astronomy, a cooperation between the Dutch astronomical institutes, and in the Institute for Mathematics, Astrophysics and Particle Physics at the Radboud University in Nijmegen. The department is focused on the study of black holes, jets, compact binaries, optical and radio transients, gravitational-wave and radio astronomy, stellar and binary evolution, stellar clusters, Galactic structure and magnetic fields, cosmic-rays and astroparticle physics, and asteroseismology. The ‘instruments’ which we are using and dealing with the associated data processing and modelling software efforts, are High Energy Astrophysics, Particle Astrophysics, Cosmic Magneto Hydro Dynamics, and, of course, modern telescopes such as those on La Palma (UK/NL collaboration), at the European Southern Observatory, the Westerbork Synthesis Radio Telescope, the LOFAR telescope, the Event Horizon Telescope, the Pierre Auger Observatory and the BlackGEM telescope array.

SRON is the Dutch national institute for space research. They build essential components for space telescopes, such as cameras and spectrometers. For example, they are currently working on instruments for ESA’s new X-ray satellite Athena and the future exoplanet hunter PLATO. SRON specializes in telescopes for X-ray and infrared astronomy, exoplanet research and earth observation. In the future, the institute will also be involved in measuring gravitational waves.
Next to building space instruments, SRON has four science programmes. These are not coincidentally closely related to their satellite missions. SRON scientists study the Universe in X-rays and infrared, search for exoplanets, analyze Earth’s atmosphere and develop new detector technology equipped for space.
Apart from its scientific efforts, SRON is also the national expertise institute for The Netherlands. They provide counsel to the Dutch government and coordinate—from a scientific viewpoint—national contributions to international space missions.